The Conrad Weiser Homestead is open on a limited schedule. Please check our calendar for days of operation.

Site closed for the winter

The Conrad Weiser Homestead does not charge admission but relies solely on donations from visitors.

Guided tours are available most days.

Special events are also scheduled throughout

The tour of the Weiser Homestead is self-guided; however, volunteers are happy to answer any questions and provide additional information upon request. The tour includes three buildings – the Visitor Center (Scheetz House), the Weiser House, and the Education Building. The current exhibits were installed in 2002 and can take anywhere from 40 minutes to 2 hours to entirely comprehend and digest. Cameras are permitted inside of the buildings.

The Conrad Weiser Homestead is on 26 acres of land. Seven total buildings exist on the property; three are open for touring. Two large monuments, a gazebo, the Weiser Family Cemetery, and a pond are also on the site. Two picnic areas are present in the western section of the park and can be utilized at any time without reservation. The park is an attractive venue to walk, run, or play Frisbee. Public restroom facilities are available. Dogs are permitted, but must remain on a leash. 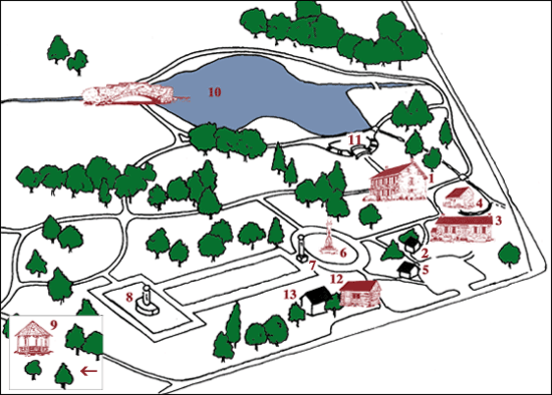 John Sheetz purchased the old Weiser property in the early 1830s, utilizing the land for agricultural means. According to the date stone in the eastern gable, Scheetz erected the large stone building in 1834. It appears around this era that Scheetz added both the bake oven and the northern partition to the Weiser House. Furthermore, the massive barn, just to the south of the site’s property, was constructed near this time as well. It is believed that the Scheetz family most likely designated the Weiser House as a summer kitchen.

The interior of the Scheetz House contains nearly all original woodwork, doors, and latches throughout two and half stories. The room immediately through the main entrance, where the visitor’s desk is located, was a kitchen and has been slightly modified in contrast with the other rooms. The original fireplace was closed, the floorboards were replaced, and a partition wall/doorway was added. Nonetheless, the hinges, locks, and latches were unchanged throughout the house, adding an element of authenticity. The tornado, which devastated a large portion of the property in 1904, seems to not have ravaged the Scheetz House nearly as badly as the barn or the Weiser House.

2. Restroom Building
This building houses the site restrooms and was constructed in the 1920s as part of the original Olmsted park plan.

3. Weiser House
The Weiser House is the only structure on the property that could have existed when Conrad Weiser was alive. The exhibit inside the northern room of the Weiser House highlights the various personalities that Weiser interacted with throughout the duration of his life in Pennsylvania. Weiser’s religious affiliations with the Ephrata Cloister and the Moravian and Lutheran churches are touched on in the exposition. Also, the display illustrates the miscellaneous types of figures who visited his homestead, including scientists, prominent politicians, and Native American dignitaries. Over 50 biographies of individuals who spent considerable time on the property are available to view in the Weiser House. The southern room of the Weiser House contains examples of mid 18th century furniture, which many middle class German settlers would have had in their homes, such as tables, chairs, a blanket chest, and a family bible. Finally, the main fireplace, which includes a bake oven, is in the southern room. The aforementioned room is setup to portray how the Weiser family may have lived in the dwelling.

The southern room of the Weiser House is certainly the oldest section of the building. The northern room and the bake oven were added later in time, as the original dwelling was seemingly more square-shaped rather than rectangular. Through data analysis, it appears that the northern room and the bake oven were constructed contemporaneously with the Scheetz House and the Barn in the early 1830s. If one is to view pictures of the Weiser House prior to 1926, a division is clearly visible on the outside of the building between the northern and southern rooms. Between 1926 and 1928, the mortar was repointed on the Weiser House to somewhat cloak the obviousness of the partition.

One of the greatest hindrances in determining the exact age of the Weiser House and its components is that the vast majority of the inside of the building was replaced in the early 1900s. In 1904, a tornado removed the entire roof from atop the Weiser House. The building’s walls appeared undamaged. Then, in 1907, a vicious fire essentially gutted the Weiser House, destroying a great deal of the original wood inside the dwelling. After the fire, extensive talks ensued as to what should be done with the structure, including the suggestion to demolish it entirely. However, the building was refurbished.

To this day, an enigma overshadows the Weiser House – did Conrad Weiser actually live in this building on the property? The original part of the house is overwhelmingly diminutive for a rather well to do family to raise seven children and comfortably house visiting dignitaries. Oral history suggests that this was the house of Conrad Weiser, however, Weiser had two grandsons named Conrad who may have lived on the property. Could the names have been confused in the fog of local legend? Furthermore, it has been inferred from wills and inventory listings that many other buildings, such as barns and mills, existed on the property when Weiser lived here. Could he have lived in log building that has since deteriorated – perhaps? The archeological testing conducted upon the site in 2001 proved inconclusive, because no additional building foundations were located around the homestead. There is simply not sufficient evidence to suggest that the house was not Weisers', therefore, the building is accepted as the home of Conrad Weiser.

4. Springhouse
The springhouse is not normally open to the public for touring, but the structure is an essential element of every rural farm, serving as a source of water and a primitive “refrigerator.” Currently, underground piping carries water from a nearby spring and delivers it into a hand-cut stone trough outside the springhouse. Typically, springhouses serve as a means of refrigeration for the family farm. Cold water from the spring would run through a trough in the floor of the springhouse, and milk and butter could be stored on the floor. In addition, the constant flow of water aided in cooking inside the springhouse, making cleanup more simplistic. The upper level of the building was probably used for storage.

If one looks rather closely at the southeastern wall of the building, a large patched-over hole exists. An oven used to reside in the wall, but was removed prior to 1904. Early accounts placed the date of the springhouse in alignment with the Weiser House, potentially indicating that Weiser himself may have built and used the structure. However, recent studies suggested that it could have been built at a later time

5. The Education Building
The Education Building was built in the 1930s as the site maintenance building. This building is open to the public and contains information pertaining to the evolution of the homestead after Weiser’s death. This display includes modern additions to the park and illustrates the continued efforts of the community to uphold the Weiser legacy. The building also houses the original gravestones of Conrad Weiser and his wife Anna Eva to preserve them from the elements. A video of the Conrad Weiser story can be viewed in the Education Building.

6. The Weiser Gravesite
Conrad Weiser is buried atop of the small hill to west of his house. In addition to Conrad Weiser, his father, his wife, his son Fredrick, his six children who died before adulthood, and several of his Native American cohorts are supposedly, according to oral history, buried in the cemetery plot. Conrad and Anna Eva’s gravestones were the only legible ones, as the various other gravestones in the plot have no visible writing upon them. Ground Penetrating Radar and archaeological tests were conducted in 2001 in the family cemetery yielding inconclusive results. Future archaeological studies could produce more concrete conclusions.

7. Weiser Monument
This monument was purchased in 1909 by the Berks County Chapter of the Patriotic Order of Sons of America and was originally located in front of the Womelsdorf High School. It was moved to the site of Conrad Weiser’s grave in 1926.

8. Shikellamy Statue
This statue of Weiser’s Iroquois counterpart was executed by a New York sculptor, Joseph Pollia, in 1930 and placed in this prominent position. The 1926 Olmstead Brothers landscape plan for this site included a mall connecting the Weiser Gravesite with this square. These “exterior rooms” were common features in Olmstead-designed and influenced parks.

9. Gazebo
The gazebo, built in 1926, was originally meant as an overlook area from which visitors could enjoy natural vistas created by the landscape plan. Other Olmsted trademarks were serpentine drives and paths and the creation of natural settings of meadows and groves of trees.

10. Pond
The pond was manmade, created for aesthetics and fed by natural springs. Fishing and swimming are prohibited.

11. Overlook and Soldier
The Conrad Weiser Memorial Park Association, which founded this site in the 1920s, honored the “Heroes of the Tulpehocken” by erecting this statue of an American “Doughboy” at this overlook in 1926.

12. Log Hut
This small log hut was moved to this site by the Founders of the park in 1927. Its original location and use are unknown.

13. Maintenance Building
This site maintenance building is not routinely open to the public.