The Pennsylvania Regiment (Weiser’s Battalion) is an organization that portrays a uniformed provincial military unit from Pennsylvania that existed from 1756 to 1758 (part of the French and Indian War period).  It was a Pennsylvania Provincial unit that was paid by the Pennsylvania colony but under the British Army jurisdiction. The 1st Battalion, commonly called Weiser’s Battalion, was in charge of the chain of forts built along the Blue Mountain to help protect and intercept the enemy.  The forts stretched from Allentown to Harrisburg.​​

The unit is currently quartered at the Conrad Weiser Homestead in Womelsdorf, Pa.

​The recreated unit displays 18th century camp life, cooking, and English drill of the time period.  We explain the uniforms and equipment of the 18th century soldier and the weaponry that they used.

The unit has a commitment to portraying historical events and people to the best of their abilities through research and the recreation of those times.

We portray a particular group of people and have carefully researched rules regarding appropriate clothing and equipment associated with that group of people. New member are required to serve a probationary period. We are committed to making Busse’s Company a wholesome family activity. In that regard, families are welcome to join together.

For further information about the unit or membership, contact: 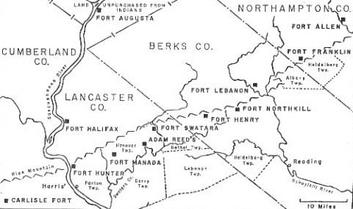